Jason Bahbak Mohaghegh (Ph.D. Columbia University, 2004) is a professor of Comparative Literature at Babson College. His interest is in rising currents of radical thought in the Middle East and the West, with particular attention to exploring the concepts of chaos, violence, illusion, silence, sectarianism, and apocalyptic thought. He has written four books to date—The Chaotic Imagination: New Literature and Philosophy of the Middle East (Palgrave Macmillan, 2010), Inflictions: The Writing of Violence in the Middle East (Continuum 2012), The Radical Unspoken: Silence in Middle Eastern and Western Thought (Routledge, 2013), and Insurgent, Poet, Mystic, Sectarian: The Four Masks of an Eastern Postmodernism (SUNY Press, 2015). 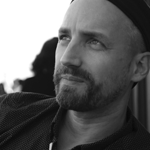 Dejan Lukic (Ph.D. Columbia University, 2007) is a professor at the School of Visual Arts, New York City and author of the book Phantom Territoriality: Hostage Spaces of the Contemporary Islamicate World (Bloomsbury, 2013). He is trained as an anthropologist, but more importantly he is a writer and teacher who addresses issues pertaining to the nature of images, phantoms, and apparitions. His current writing engagements revolve around the notions of charisma and ocularity. All of his work is, more generally, concerned with the inescapable convergence of politics and aesthetics. He is also a co-founder of the Vitalist Cuisine project.