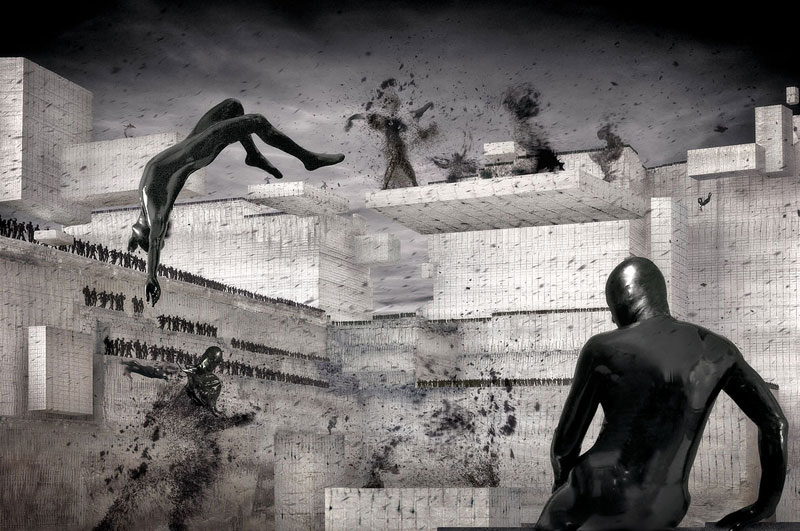 We return to the precise classifications of miracle then, as these strata provide us crucial insight into the types of wonder that masters induce in those who behold them and cross their paths. The next category of miracle is therefore linked to the Body, and there are countless variations of metamorphosis therein. These include: the ability of shape-shifting or incarnation, the ability to expand or dwindle to immense and miniature sizes (or even to change the size of one’s shadow along the ground), the ability to manifest crystals or electricity from one’s flesh, the ability to heal scars or diseases, the ability to withstand extreme deprivation (somehow surviving while being denied food, water, or even breath), and finally the ability to become air or liquid whenever the master chooses. These bodily miracles always emanate from a unique relation to the realm of sensation, to the scales of pain and pleasure, and ultimately to a knowledge of important techniques of endurance.

The next category of miracle involves Movement. These include the ability of flight, the ability of teleportation (meaning to jump in space) or of surface-climbing (such as walking on water or up walls), and the abilities of Invisibility or Disappearance. As a consequence, these movement-based miracles always emanate from a radically altered relation to space and boundaries, one that perceives borders not as barricades but rather as portals through which one can traverse, trespass, or escape.

The final category of miracle concerns the domain of Nature, and this bond is intimately familiar to those who have ever studied the genealogies of pagans, healers, shamans, medicine men, fortune-tellers, oracles, or priestesses. The masters here are always engaged intensely with the fluctuations of the natural world, concocting potions or elixirs out of bare ingredients, or interpreting the winds and rains in order to materialize transformations of some kind. Not transcendent, but visceral (even when speaking of transcendent things). They build their sensitivities to the weather, they translate the dynamics of land and smoke, they learn to strike deals with whatever is most palpable and tangible before them. Thus the stories of these miracles include the ability to control the elements (for instance, calling forward thunder or earthquakes), the ability to hear storms coming, the ability to speak in hidden tongues and communicate with animals, angels, ghosts, or demons, and the ability to emit light or darkness across a room. This miraculous grasp over the natural order is not accidental though, for it arises from a conviction that one can learn how to bend the spheres of fire or dust, to make them react and turn to one’s own desire.

Unica Zurn was a visionary artist and writer of the 1950’s and 1960’s who worked closely with the Surrealists and generated both poetry and visual pieces resembling dreams, nightmares, fantasies, and fairy tales. At the center of her imaginative universe, though, was an extraordinary experience that she had as a young child, where she claims one day to have roamed into a garden to find a chimerical figure who she would name the Man of Jasmine. Zurn writes:

“One night in the sixth year of her life a dream takes her behind the tall mirror on the wall of her room…Then her vision appears to her for the first time: The Man of Jasmine!..He is paralyzed! What good fortune. He will never leave his seat in the garden…

And she marries him. The loveliest thing about it is that no one knows. And this is her first, her greatest secret.”

The image of this miraculous meeting would recur throughout the next decades of her life, even amid psychotic collapses and periods spent in and out of insane asylums. Thus Zurn speaks of her being perpetually encompassed by this entity, like an oracle occupied by a celestial spirit:

“Someone traveled inside me, crossing from one side to the other. I have become his home.”

Then one day, a startling event would occur in the hospital where she was staying, an event that would make an irreversible incision in her consciousness. The Man of Jasmine arrived to meet her, stepping into her room in human form. Thus she writes:

“She experiences the first miracle in her life: in a room in Paris she finds herself standing before the Man of Jasmine. The shock of this encounter is so great that she is unable to get over it. From this day on she begins, very very slowly, to lose her reason.”

In the aftermath, it was known that Unica Zurn became increasingly obsessed with numerology (particularly the number 9) and started devising compulsive anagrams (poems where the letters were rearranged to form other words and coded messages). And her drawings would now take on the settings of wild spaces: gardens, groves, jungles, endless vines and plants intertwined, and strange vegetal beings with many eyes and faces among them. The ideal kingdom for the Man of Jasmine. Thus she would paint the miracle over and again.