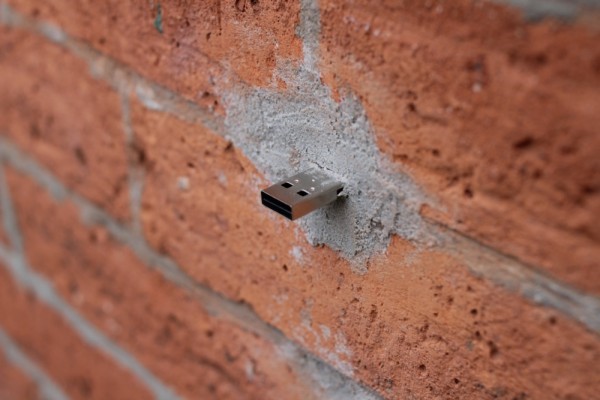 Description: Berlin based media artist Aram Bartholl has created an offline file-sharing network in the public space by embedding hidden USB flash drives into building walls of New York City. Each drive has only the instructions of the project (that “‘Dead Drops’ is open to Participation”), The Dead Drop Manifesto, and empty space. Aram intends for anyone to leave or extract stranger’s files by plugging their laptop into the wall and accessing an ‘Un-cloud’ public network.

Dead Drops were originally used as a method of espionage tradecraft allowing for the optimally secure exchange of secrets and physical items between conspirators wary of meeting in person. Now, the same technique has been electronically modified to both immensely expand the amount information able to be shared in a single location and to promote the ‘free’ form of the flow of data. Data obsession, being a common condition for the current individual, rarely involves the lack of possession and authorization. For better or worse, an anonymous file-sharing network allows access to the intimate without the interference of identity.