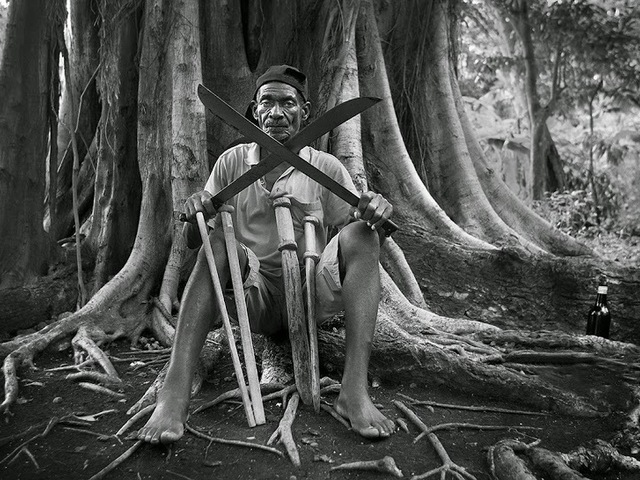 This blade has many histories: an implement of hard labor in the cane fields and rain forests; a mechanism of insurgent action in anti-colonial rebellions; and a transcendent instrument of dream-fighting in hidden gatherings across the island. Creation, destruction, and banality thus converge here (along the sharpened surface): immense narratives of economic misery, political resistance, and otherworldly aesthetics all find their source in the wooden handle of the machete. What is this mad potential housed within the object, the artifact, the thing—that it might serve such mutually exclusive forces? How does the same device that enforces daily toil and emaciation, or which drips with the blood of concrete revolutionary action, now come to associate itself with an outsider art-form (of simulated fatal movement)? What does it take for bare technology to become theater, vision, dance? Nothing less than a colossal semiotic overthrow: that this relic can transition between meanings so seamlessly (part-burden, part-weapon, part-medium), is the sign of a phenomenological breakthrough…for it draws a calligraphic arc from the material to the immaterial, from disenchantment to enchantment, senseless pain to ecstatic pain/pleasure, from deadening everydayness to the secretive, the untold, and the realm of cruel play.